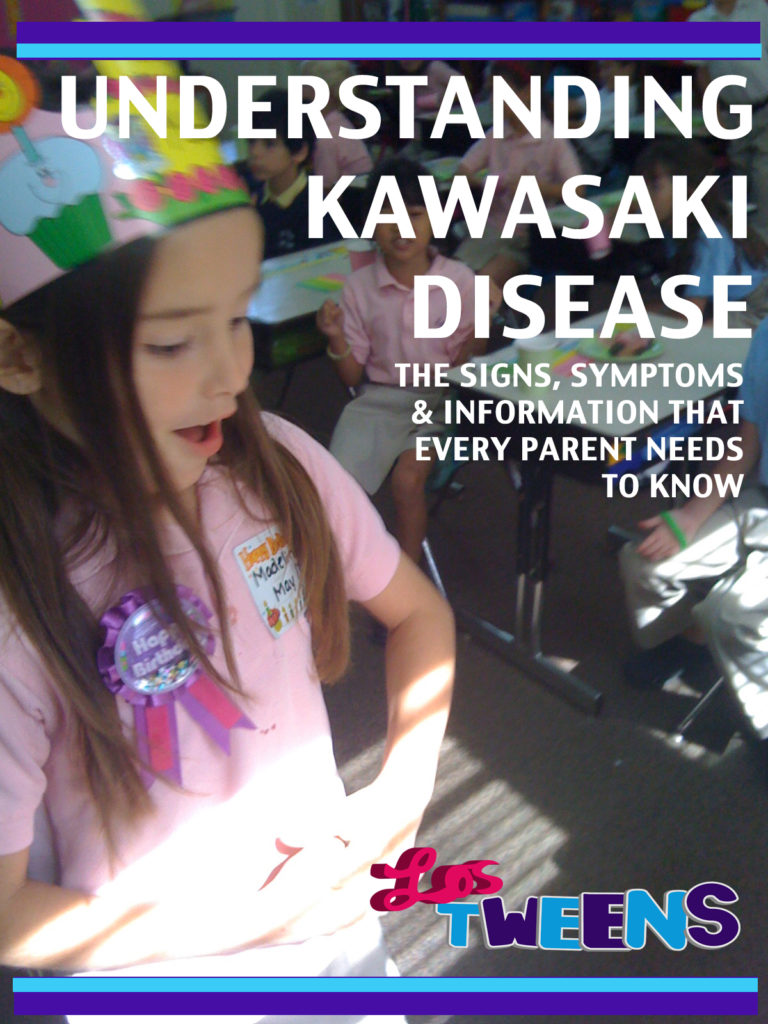 Mother’s Day, 2009 – My husband is in Maryland visiting his very ill grandmother.  My toddler is with my mother.  Our plans for brunch were canceled.  I’m in the emergency room of the local children’s hospital with my tween Maddy.

The pediatrician had called an hour earlier to follow up on our visit to her office.  Maddy had a fever, rash and swollen fingers and toes. The doctor was concerned but I figured it was strep throat.  By that Sunday, Maddy no longer had a fever and the rash had gone away but her hands and feet were still swollen and starting to peel. The pediatrician was concerned.  Really concerned.  “It may be Kawasaki disease,” she said.

Until then, to me Kawasaki meant motorcycles and jet.  I had no idea what she was talking about.  I didn’t know that I was lucky my daughter was still alive.  And, I had no idea that the pediatrician was going against the odds by making this initial diagnosis.

The disease primarily affects young children and about 80% of patients are five years old and younger.  Kawasaki disease is more prevalent in boys and children of Asian and Pacific Island descent.  But Maddy was seven-years old, a girl and without a drop (as far as we know) of Asian or Pacific Island blood.

Thankfully, these facts didn’t deter my pediatrician or the doctors at Miami Children’s Hospital from making the diagnosis and treating my daughter.  But it did for a good friend of mine.  Her daughter was diagnosed with Kawasaki disease only after damage had been done to her heart.  Doctors had ignored the symptoms because she “didn’t fit the mold.” And, while her mother knew there was something wrong, she had no idea what it was. She, like myself, had never heard of Kawasaki disease.

Symptoms of Kawasaki disease include:

Because there is NO test for Kawasaki disease, it is important for healthcare providers and parents to recognize the symptoms.  And know that not all symptoms have to be present.  Maddy only had a fever that lasted for five days, a rash and swollen, peeling hands and feet.  That was enough for the doctors to take important measures to save her from possible heart damage.

42,000 children are diagnosed with Kawasaki disease in the U.S. each year.   And while still rare, the number of cases are rising yearly.  The cause of Kawasaki disease has yet to be discovered.  If found early,  a treatment of immunoglobulin given intravenously and a low dose aspirin regimen to prevent blood clotting.  Echocardiograms are performed routinely to check for heart damage.

Maddy has recovered fully from the disease and the only marks that are left behind are the early wrinkles on my forehead.  A recent episode of Grey’s Anatomy featured a case of Kawasaki disease that almost went untreated because the doctors thought it was strep throat.  In the episode the mother fought back against the doctor’s demanding that something was seriously wrong with her son.  Parents are many times their children’s best advocates and it’s important for us to educate ourselves.