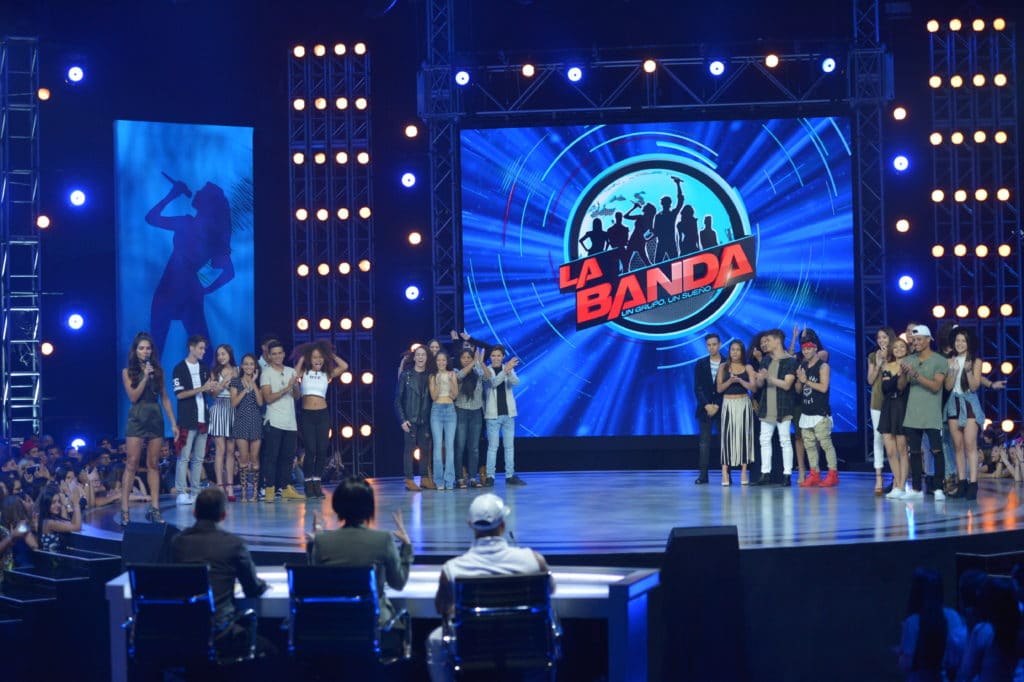 The live rounds beginning Oct 30th, where 8 boys and 8 girls passing on to the next round.

After the success of the first season’s winning band CNCO, the music-based multi-media reality entertainment competition “La Banda” returns for a second season and is bigger than ever.

This time, the search is on for boys AND girls in the U.S. and Puerto Rico.

We recommend: [Video] Fun Quality Time with my Teen Girls Thanks to “La Banda”

The pressure is on as the remaining 16 finalists will perform live on national television.

Episode after episode they will be presented with challenges toshowcase their individual and collective star power.  Contestants will be eliminated until the best combination of boysand girls that will become the next Latin super group sensation is found.

We were very excited to be able to chat over the phone with the 8 Latin boys competing. We asked them three questions each to get to know them a little better and these were their responses:

If you could choose an artist to mentor you, who would you choose?  Wisin because he was the judge that saved me in the competition and he would be perfect because there’s already that trust in me.

Watch Garmandy get a second oportunity thanks to Wisin:

Song you would love to sing in “La Banda”: Michael Jackson’s “The way you make me feel”

If you could choose an artist to mentor you, who would you choose? Usher, because we share the same idol inspiration, Michael Jackson, and he would be someone who can take me to the next level.

Something fun or surprising of “La Banda”: When we are dressing up for the show, the team gives us the clothes and sometimes it doesn’t fit well and we need to look comfy and relax, when really we may have pants that are too tight.

Watch Fabyan get a second chance:

If you could choose an artist to mentor you, who would you choose? Michael Jackson, the leyend, he’s an idol and an incredible human being.

Something fun or surprising about “La Banda”: Even though this is a competition, we all help each other in everything. When we are at the hotel, we work as a team. We have a great family. Also, us the boys like Felix and I, we exchange outfits….and if we make the band, this teamwork would definitely help us.

Watch Abdiel “The heartbreaker” make it to the next round:

Song you’ll love to sing in “La Banda”: Let me love you by Justin Bieber and “Amiga” by Jan Carlos Canela

If you could choose an artist to mentor you, who would you choose? One of these: Michael Jackson, Wisin or Chris Brown, because I’ve listen to him since I was very young.

Something fun or surprising about “La Banda”: All of us decided to do each other pranks. Nothing hurtful or dangerous, but to have fun. We did it about a week ago in a group chat that all of us 16 are part of.

Christian Castro is a barber and young dad who captivated the audience with his rendition of “Promise:”

Song you’ll love to sing in “La Banda”: “Corazón Sin Cara” by Prince Royce, because I can get emotional and connect with the girls.

If you could choose an artist to mentor you, who would you choose? Justin Timberlake, because his music style is diverse with pop, soul, etc.

Something fun or surprising of “La Banda”: Now I miss Mexican food a lot. Here there’s a lot of Cuban food, which I like, but I do miss my enchiladas and tacos.

Song you’ll love to sing in “La Banda”: “Entra En Mi Vida” by Sin Bandera, which my aunt taught me.

If you could choose an artist to mentor you, who would you choose? Laura Pausini, because in my audition she gave me a lot of tips that has helped me a lot.

Something fun or surprising of “La Banda”: Me, being a minor that’s still going to school, I need to juggle practicing for the show and also doing schoolwork. While the older ones get to practice, us younger ones need to study with our tutor everyday. It’s a challenge to do it all.

Song you’ll love to sing in “La Banda”: One of the songs by Sean Paul that I did for my audition.

If you could choose an artist to mentor you, who would you choose? Ricky Martin because he’s one of the big ones in my island and I’ve identified a lot with his beginings.

Something fun or surprising of “La Banda”: Fans only see two hours a week on Sundays, but we need to dedicate many hours during the week. Our days start at 6am until 10pm and our staff sometimes stay much later. I’m definitely not a morning person!

Song you’ll love to sing in “La Banda”: “Entra en Mi Vida” by Sin Bandera, to sing a more romantic song because I haven’t had the opportunity. Also “A Ti” by Ricardo Arjona, which I’ve listened to since little.

If you could choose an artist to mentor you, who would you choose? Daddy Yankee because since little I’ve been listening to him and he’s a great producer and singer. Also Wisin because I’ve grown fond of him due to all the tips he has given me.

Something fun or surprising of “La Banda”: In order to make the show happen, we need to depend on the production team. They are the ones always running behind the scenes.

Watch Brian do his thing:

Fans are invited to download the Univision Conecta app– their VIP all–access pass forexclusive content and to engage with the show in real–time via voting, trivia and polls. The show’s official site www.LaBandaOficial.com, which will also offer exclusive videos of talentand contestants, behind the scenes access and much more.