A Mom’s Personal Journey with Autism

We asked an amazing middle school teacher and friend to share with Los Tween’s readers her very personal story regarding her son’s Autism diagnosis in the hopes that it will help parents know that they are not alone.  There are many moms and dads who struggle but the important thing is to continue to fight for our kids.  Be sure to check back for the second post in this two-part series which includes important resources and information.  Thank you, Eileen, for sharing with us and helping us promote change. 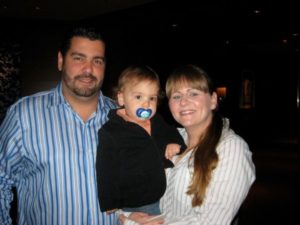 At 6 months, our son couldn’t sit up on his own, we’d prop him up on a pillow and soon, he would just kind of fall over.  By 9 months, he couldn’t and wouldn’t, hold his own bottle. By 12 months, he would stand holding onto something, but his knees would buckle as though the weight was too much. He didn’t respond to his name when called and he never looked at us. He always seemed to look through us. He would repeat the same motions over and over again, bobbing his head, grinding his teeth and this would go on for hours if I’d let him.  He didn’t talk, babble, coo and goo – nothing. He rarely cried. It was then that I began to realize that he didn’t live in our world.  He was trapped in his own mind, with no way to communicate with us.
I started reading up on Autism. I tried to gain as much knowledge on the subject as possible.  Autism is a developmental disorder that appears in the first 3 years of life, and affects the brain’s normal development of social and communication skills.   A neuro-typical child watches his or her parents, grandparents, and others around them and eventually just kind of picks up the way you ask for stuff, play with toys and interact with people in general.  It’s learned behavior by simply watching the world around them. 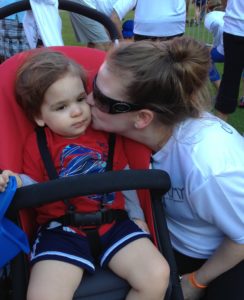 When we took Dago for his well-child check-up after his first birthday, his pediatrician asked if he was saying anything.  When I told her that he was silent, she looked concerned.  She sent us to a local center.  They try so hard to do a good job, but are so overwhelmed with the amount of cases.  We decided to go the private route.  That way hurts financially, but it was our son and we weren’t going to coupon-clip his future.  We ended up at the Autism Spectrum Assessment Clinic (ASAC) at the University of Miami.  He was then diagnosed by a very wonderful Dr. Amy Beaumont.  She declared his diagnosis as moderately autistic. He was 2 months short of his 2nd Birthday.
Autism is not the end, there are treatments, therapies, and support out there.  1 in 88 children (with boys being 5 times more likely) is a staggering statistic and the reaction to fight it is astonishingly slow.  If this were a deadly disease, we’d be all over it, clambering for a cure. Autism may not be killing their bodies, but it kills minds and spirits.  We need to find the cause.  These kids need our help.
If you’d like to help, please consider making a donation to the Dan Marino Foundation: www.danmarinofoundation.org