“Have you brushed your teeth?”

“Did you brush your teeth?”

“Don’t forget to brush your teeth.”

“When was the last time you brushed your teeth!?!”

Reminding the kids to take care of their teeth feels like a full time job in my house.  But when we received the new Crest Complete Deep Clean line of products, the kids were fighting over who got to brush first.  Two weeks later and while I am still chasing around my five year old, my tween is in love.  You’d of thought the products were made for her!  (Watch the video, you’ll see!)

When she stopped using the kiddy toothpaste and started using the adult one, she complained that it was “too minty”.  I ignored her complaints because clearly she was used to bubble gum flavored anything would be “too minty” in comparison.  She rarely if ever flossed because she complained that it was “too much work”.  And, using mouth wash was a losing battle.  What I failed to realize was that she needed a line of products that SHE liked.

It’s important for us as parents to teach our kids good oral hygiene especially when they are tweens and still developing their habits.  Another great reason to focus on oral hygiene is the development of self-esteem at this age.  Research shows that there is a link between a person’s confidence and their oral health.  I know I definitely have felt more confident about my smile since I started using the Crest products.  And, as our tween enter the dreaded teen years nothing is going to help them through it all more than strong self-esteem.

Want your own Crest Complete Deep Clean products?  Here is how:

Disclosure: I wrote this review while participating in a test drive campaign by Latina Mom Bloggers on behalf of Crest and Oral-B and received product samples to facilitate my candid review. Latina Mom Bloggers sent me a promotional gift to thank me for taking the time to participate. However, all opinions expressed are my own. 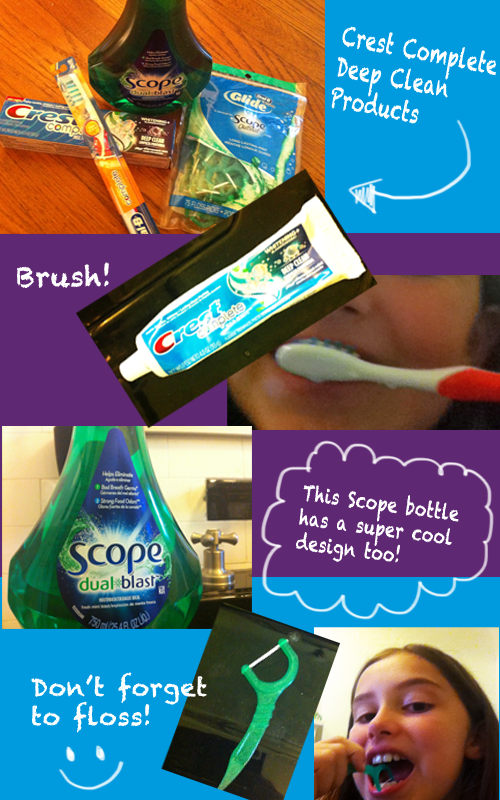 The “Crest Complete Deep Clean Prize Pack” (Giveaway) is sponsored by Los Tweens and Teens and Crest (“Sponsor”) .  The Giveaway is governed by these official rules (“Official Rules”).  By participating in the Giveaway, each entrant agrees to abide by these Official Rules, including all eligibility requirements, and understand that the results of the Giveaway, as determined by Los Tweens, are final in all respects.  The Giveaway is subject to all federal, state and local laws and regulations and is void where prohibited by law.  The Giveaway will be supported through Los Tweens Facebook Page (www.facebook.com/lostweens).

ELIGIBILITY
Open to legal residents of the fifty (50) United States and the District of Columbia, 18 years or older at the time of entry and who have a Facebook account prior to the time of entry.  Entrants must like Los Tween’s Facebook page (www.facebook.com/LosTweens) and Crest’s Facebook page (www.facebook.com/crest) and post a comment on each to be eligible to win.
Do not participate in the Giveaway unless you meet the eligibility requirements.

WINNER SELECTION
DRAWING AND WINNER NOTIFICATION:  Winners will be selected randomly on August 31, 2012 using an online randomization using www.random.org.  Winners must meet all eligibility requirements.  Odds of winning depend on the number of eligible entries received.  Potential winners will be notified via Facebook Direct Messaging and will be asked to confirm.  Failure to complete the form within 48 hours will result in disqualification and a new winner will be drawn.
If a potential winner fails to comply with these official rules, that potential winner will be disqualified.
Winners may not substitute, assign or transfer a prize or redeem a prize for cash.  Winners agree to comply with all applicable terms and regulations in connection with the prize.  The winner is solely responsible for all other costs and expenses.  ALL FEDERAL, STATE AND LOCAL TAXES ASSOCIATED WITH THE RECEIPT OR USE OF ANY PRIZE ARE SOLELY THE RESPONSIBILITY OF THE WINNER.
Los Tweens and Teens, LLC reserves the right in its sole discretion to disqualify any entrant who is found to be tampering with the entry process or the operation of the Giveaway; to be acting in violation of these Official Rules; or to be acting in an unsportsmanlike or disruptive manner, or with the intent to disrupt or undermine the legitimate operation of the Giveaway, or to annoy, abuse, threaten or harass any other person.  Los Tweens and Teens, LLC reserves the right to seek damages and other remedies from any such person to the fullest extent permitted by law.
Sponsor reserves the right to terminate or modify the giveaway without prior notice at any time, to terminate the giveaway, in whole or in part, or modify or suspend the giveaway for any reason.

INDEMINIFICATION AND LIMITATION OF LIABILITY
By entering the promotion, each entrant agrees to indemnify, release and hold harmless sponsor and its parent, affiliate and subsidiary companies, advertising and promotional agencies, and all their respective parent corporations, affiliates, officers, directors, employees, represenatives and agents and each of their respective affiliates, representatives,  employees, from any liability, damages, losses or injury resulting in whole or in part, directly or indirectly, from that entrant’s participation in the promotion and acceptance , use or misuse of any prize that may be won.  Sponsor and its parents, subsidiaries, affiliates, advertising and promotional agencies, and all their respective officers, directors, employees, representatives and agents disclaim any liability for damage to any computer system resulting from access to or download of information materials connected with the promotion.