Today, on National Girls and Women in Sports Day, we’re taking a look at the benefits and challenges that exist for girl in sports.  Los Tweens is a proud sponsor of a girls’ basketball team.  We believe strongly in the benefits and lessons tween girls (and boys) learn through athletics.  We’ve written articles on the importance of team sports and shared stories on the fears that sports can help tween girls overcome.  In partnership with Ford Latino (#FordLatino), we celebrate the educational and extracurricular accomplishments of tweens through Celebrate Education/Educación (#CelebrateEdu). 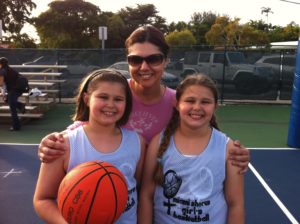 Tween girls, especially Latinos, who participate in sports have higher grades than their non-athletic counterparts.   As they grow, girls in sports have lower high school drop out rates, lower pregnancy rates, are less likely to use drugs and are more likely to graduate college.  Even further down the road, women who regularly exercise have a decreased risk of breast cancer, increased bone mass and decreased chances of osteoporosis.
Many of these benefits are linked to the fact that girls who participate in sports report higher self-esteem levels and feel more confident.  According to the Girl Scout Research Institute, the more physically active girls are the better they feel about their weight no matter what their weight is.  At an age where body image and self-esteem begin coming into question, sports offer a confidence boost for tween girls.
Yet, despite the benefits there are still large gaps between athletic girls and boys and Hispanics and non-Hispanics.  In 2011, 1 in 2.5 girls participated in high school sports.  This number represents an 800% increase over what it was before the enactment of Title IX, the amendment to the Education Bill that promotes gender equality in school sports. But, it is still lower than the number of boys who participate, 1 in 2.
An even higher disparity exists between Latino girls.  According to USA Today, 36% of Hispanic sophomore girls played interscholastic sports while 52% of non-Hispanic girls participated in the 2001-2002 school year.  Only a 7% difference existed between Hispanic and non-Hispanic boys.  The large cultural gap may be attributed to the upholding of traditional gender roles by parents.
Parents play a large role in their child’s athletic interests.  Children, especially females, are more likely to play a sport if they receive positive reinforcement from a parent.  If the benefits listed above aren’t enough to encourage parents to support their daughter’s interest in sports, consider this fact: 80% of women identified as key leaders in Fortune 500 companies played a sport as a child.
Set your tween daughter on the road to success and encourage her to play a sport.

DISCLAIMER: The #CelebrateEdu series is sponsored by Ford.  All opinions and facts were collected and written by Los Tweens & Teens LLC.