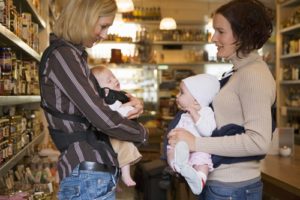 I knew it was playdate suicide immediately after offering a cookie to a new friend’s organic-only, no-TV son. I was trying to bribe the boys to clean up, but by the look on her face I felt as though I was pushing drugs.
“You let him eat that?” she asked. When I nodded yes she continued, “We don’t let our children have any sugar.”
It’s not as though I’m a junk-food fanatic, but during the terrible twos, cookies did tend to be my go-to reward.
And while I breastfed both of my children for months, I have to admit, when I later found out she was still nursing her 3-year-old I realized we weren’t destined to become best friends.
Playdates with new mom friends can seem a lot like dating; both the excitement that comes from starting a friendship and the dread from knowing something can go horribly wrong. When parenting styles clash, a cool mom we met at the park can suddenly seem like a mother from another planet.
It’s one thing to hang out with friends who make different choices from our own, but when someone else questions our parenting skills, the mommy-defense mechanism springs into action.
Susan Newman, Ph.D., a social psychologist and author of more than a dozen books about parenting, explains it like this: “There’s a part of us that thinks that maybe our friend is right. It brings up a lot of questions and possibly guilt.”

Do you have friends with completely different parenting styles than yours?

Did I feel guilty about offering cookies as bribes? Perhaps. But while we may bristle when another mom disciplines our child or critiques our parenting, speaking out immediately is definitely not the way to go.
I found that out the hard way when the 3-year-old son of a close friend hit another child with a plastic shovel on the playground. When my friend didn’t intervene, I took the shovel away and reprimanded her child. A heated argument began about whether we should meddle in each other’s affairs.
When someone gives us unsolicited advice, Newman advises saying something like, “I never thought of handling the situation that way” or “I’ll consider that.” After the fact you might say, “If my child is misbehaving, why don’t you let me handle that?” It can go a long way in diffusing the tension, Newman says.
While my friend and I were able to mend the friendship, sometimes it’s easier to spend time with our mom friends alone and leave the children at home.
“Anytime we do anything with our kids it turns into a complete nightmare,” one mom recently told me about a former close friend.
She realized they’d be better off hanging out without the kids when her friend’s daughter used crayons to deface the patio of a restaurant where they were eating. The girl’s mother said, “Well, kids will be kids.”
It nearly ended the friendship, but conflicts don’t need to.
“An overriding rule,” according to Newman, “is to evaluate the friendship and decide how important it is. If it’s very important we should handle the situation very carefully.”
How have you handled parenting-style clashes with your friends?
Kim Brown Reiner is a New York City mom, who tries not to speak to her 5-year-old daughter or 3-year-old son in the morning until she drinks coffee. In addition to freelance writing, she works as an educational consultant.