The latest revamped version of Disney’s Cinderella hit movie screens around the world on March 13th and tween and teen girls have been loving it ever since. So far our team has seen the film three times! Once during the Miami screening, then with a group of friends and then Abuela had to see it as well so we took her for a Sunday lunch date. Through movie ticket sales reported March 25th– the movie has made over $130 million! 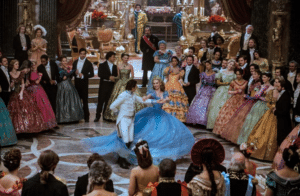 The 2015 Cinderella is visually beautiful to watch

One of the movie trailers broke Disney records for the most online views in a 24-hour period excluding Marvel releases. If I had to describe the film in ONE WORD I would call it – Beautiful. From the costumes and colors to the cinematography and scenes, the movie is visually beautiful and draws you in. While I’m not a huge fan of women hurting each other to win things or people for themselves, I did appreciate the theme of forgiveness and hope that is portrayed as well. Among my favorite actresses is Cate Blanchett who plays the role of the mean and spiteful step mother quite incredibly. I just want to one my wear red lipstick quite so perfectly. I keep hoping that she’s going to open her arms to Cinderella but then it wouldn’t be realistic either. On a separate note I love how Cate represents women over 40 so amazingly!! She looks stunning in every scene and gives hope to us all to age so gracefully.
Here’s a Los Tweens & Teens video review/report by TEENS!

The other portrayal that I appreciate is that of loving parents. Cinderella was able to endure so many hardships because she had a strong foundation of love, guidance and trust. She really is just a young teen when she looses her mother and yet her mother’s words are what guide her through dark periods and help her to find love while not becoming spiteful to those who hurt her so strongly.

Yes, there were plenty of women in the audience but the Dads and guys were there too. The new prince played by Richard Madden connects with many guys – he’s funny while trying to find his own identity and role. When I asked all our ladies about the new Cinderella Lily James, they couldn’t say enough including she seemed sincere and genuine but all agreed that Helena Carter was terrific as the Fairy Godmother. 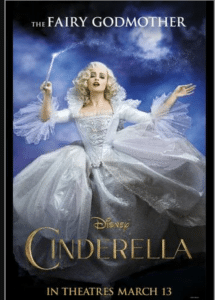 Check out the new Cinderella and share your views with our audience. We sincerely loved it… three times!!