Be sure to check out the Facebook Contest information below! 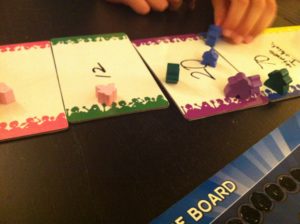 It’s a predictable chain of events.  After a big family dinner, the kids take out a board game and beg everyone to play.  Abuela will always say yes.  Abuelo will always say no.  Eventually after the kids make puppy eyes and sad faces, he will give in and agree to “one quick round and that is it!”.  He isn’t kidding.  He plays for three minutes and then leaves the table.
Recently as the usual scene played out, I grabbed “Wits and Wagers”, a game provided to Los Tweens by NorthStar games.  (Read Cristy’s review of North Star Games’ Say Anything game.) We set it up easily, read through the directions and were on our way.
The game is played in the following manner:  one person reads a trivia question off of a card.  Each player writes down his or her answer, which is always a number, on the erasable boards and places their board face down in the center of the table.  All boards are turned over and players place a small star and large star on the number they feel is closest to the correct answer without going over.  The people with their stars on the correct number receive two points for a large star and one point for a small star.

do my book report

The nature of the questions prompted many interesting multi-generational conversations. In the end, the kids won.  They were extremely excited.  Even more importantly, my father had actually played the entire game.  To top it all off, the next time the kids begged to play a board game he told them he would only play this one!
Because of the questions and the nature of the competition, “Wits and Wagers” interests and engages the entire family and has quickly become a favorite in my house.
Interested in your own copy of “Wits and Wagers” or “Say Anything”?  Our friends at North Star Games are holding a contest and Los Tweens readers are invited to participate!  Come up with a fun question for one of their games: “Say Anything”, “Wits & Wagers” or “Crappy Birthday” – and submit them on their Facebook page.  Don’t forget to add that you heard about the contest from Los Tweens.  Even if you have never played one of their games before you can participate!  The contest starts Monday, June 25th and will run for 2 weeks.
By July 9th, North Star Games will select it’s favorite questions and print them in a limited edition Facebook Fan Promotional Pack.  The chosen winners, as well as the blog, will receive all 3 limited edition packs.  The best questions may be used for future print editions of the games!  How cool is that?
DISCLAIMER: North Star Games provided Los Tweens with a complimentary copy of the game “Wits and Wagers. All opinions expressed are my own.  Los Tweens is not affiliated with North Star Games Facebook contest.