From Tweens to Teens: Taking Parenting Tips from the First Family 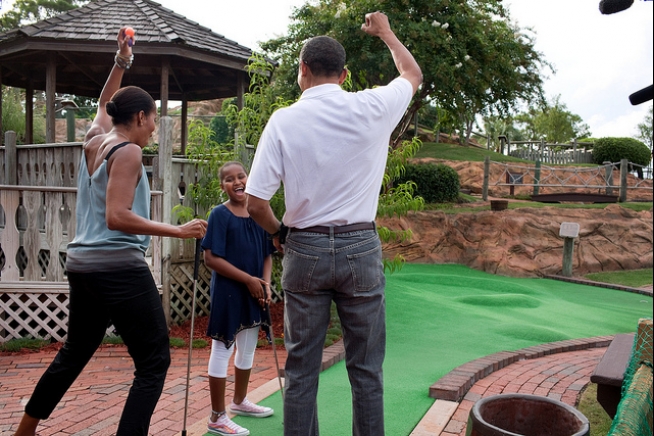 President Obama’s re-election means daughters Sasha and Malia, who entered the White House as bubbly 7 and 10 year old tweens, will be leaving it as full-fledged teens.   When the girls moved into 1600 Pennsylvania Avenue four years ago, many speculated on how the pressure of being in the constant eye of the media would impact the girls.  And while the idea of raising tweens in the international spotlight would give any parents nightmares, Michelle and Barack Obama have navigated their tweens Sasha and Malia through their first term seemingly unscathed and well-adjusted.
Family time is a top priority.  The Obamas strongly believe in the importance of family dinner.  Mom, dad and girls can be found sitting around the dinner table at 6:30 p.m. at least five nights a week.  The President’s staff schedule meetings and events around dinner and have been instructed to be sure he only misses twice a week.  Besides dinners, photos from the White House show the First Family spending quality time together exercising and watching sporting events.  Mr. Obama also served as an assistant coach on Sasha’s basketball team. 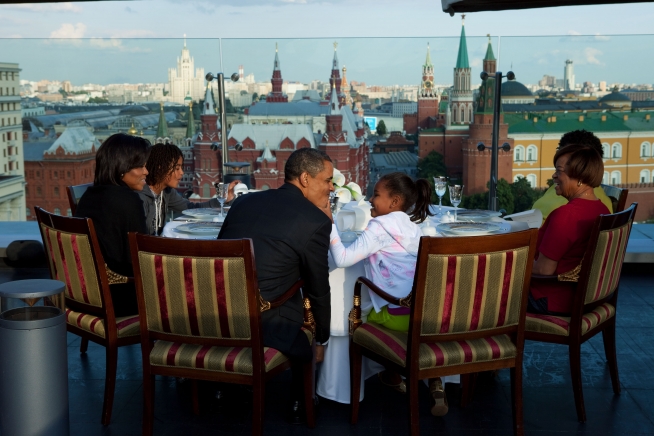 Eating dinner as a family is extremely important to the Obamas **Photo courtesy of whitehouse.gov

Setting boundaries is key. Michelle Obama doesn’t allow her daughters to have Facebook accounts.  When questioned by Matt Lauer as to why the tweens were banned from the social network site, the First Lady answered, “It’s not something they need.  It’s not necessary right now.”  Being in the social eye has also been deemed unnecessary.  On the 2012 campaign trail, Sasha and Malia only made two appearances: at the national convention and during their father’s acceptance speech.  But from all accounts, the girls are very social.  Mrs. Obama frequently mentions her daughter’s sleepovers and movie nights with friends. 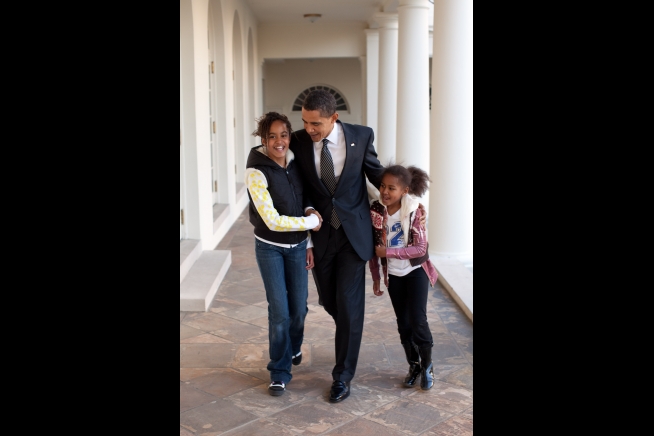 Help from Grandma.  When the Obamas moved into the White House, they  brought with them Michelle’s mom, Marian Robinson.  Mrs. Robinson has been the reliable authoritative figure in the tweens’ lives.  She picks up and drops off the girls from school, she helps with homework and attends after school activities. While the First Grandmother is an integral part of the Obama family, she is also careful not to overstep her bounds.  According to CNN, Mrs. Robinson does not regularly attend family dinners recognizing that “Michelle’s family” needs time together.
In his election acceptance speech, Mr. Obama reflected on his daughters’ growth, ” Sasha and Malia, before our very eyes, you’re growing up to become two strong, smart and beautiful young women just like your mom.  I am so proud of you guys.”  And he should be proud, he and Michelle have managed to make parenting choices that work well for their family.  From tweens to teens, lets see what the next four years bring.