We have a very strong no television and no video games during the week policy.  I was inspired to put it in place four years ago when my now tween’s Kindergarten teacher told me she didn’t allow screen time on week days.  I was shocked at first.  But, after I started thinking about it, it made sense.  I didn’t like that my children had given up on creative play and were instead sitting in front of a television every night.  We decided to test it out  it and the rule been in place ever since.
I will admit replacing screen time with active play time has been a challenge and it is even worse during the holidays  It is much simpler to turn on the television and sit children in front of it.  It also seems that the older they get the more often they are given electronics and video games as gifts.  So, I am always looking for new toys that encourage children to imagine and run around.  Which is why I am so excited to share Hasbro’s Marvel role-play packs.  We received the Amazing Spider-Man Pack with the Amazing Spider-Man Hero FX Mask, the Amazing Spider-Man Hero FX Glove, and the Amazing Spider-Man Spider Sense Chest Light.
The second I walked into the house with the toys my tweens were jumping up and down with excitement.  Jonathan was quick to pull on the gear, thrown on a blue T-shirt, dig out his old Spider-Man sandals that barely fit him and play in the yard!  Even his older tween sister joined him.  I was surprised at how interested she was in trying out the mask, glove and chest light.  They played outside and in the house for hours.  I was able to catch up on work and contemplate sending out Christmas cards…I couldn’t of been happier.  The Hasbro Marvel role-play set pack encouraged my tweens to use their imagination and exercise! 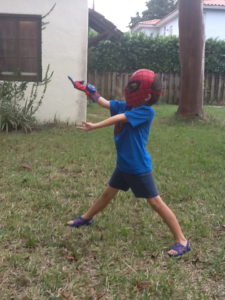 If your tween isn’t a huge fan of Spider-Man, Hasbro also carries an entire line of Captain American and Iron Man!  The Hasbro Marvel role-play packs make great holiday gifts for tweens and siblings and they’re easy to find in stores.  Visit www.hasbro.com for more information on the Marvel role-play packs and other holiday gift ideas.
Share with us which Marvel Super Hero your child is asking for this holiday and win your own The Amazing Spider-Man Role Play Pack (Total Approximate Retail Value $39.97).  Just write a post and be sure to check off that you’ve done so in the box below!
Saludos,

DISCLAIMER: This is part of a product review campaign with Latina Mom Bloggers and Hasbro; complimentary products were provided.  However, all opinions expressed are my own.
a Rafflecopter giveaway