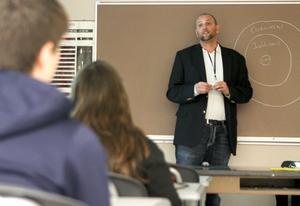 Published By: TOM LOEWY via Galesburg.com

GALESBURG —
Annie Geitner and Paige Putnam said Friday was a chance to step outside their regular high school routines and think about themselves and their relationships to their peers.
The pair of 16-year-old sophomores from Knoxville High School attended the fourth annual Teen Leadership Summit on the campus of Carl Sandburg College.
A collaboration between the Knox County Health Department and the Knox County Healthy Youth Alliance, the summit’s theme was “Everyone Wants to Rule the World.” ROWVA, Knoxville, Galesburg and Abingdon high school sophomores attended the all-day event.
“We do this because we are trying to help kids develop leadership skills,” said Erin Olson, the health department’s wellness promotion program supervisor and public information officer. “The students who attend have nine workshops to choose from and we added four new workshops this year č which came from student feedback.
All of the students who attend the summit choose four workshops. Geitner and Putnam chose “Tolerance & Diversity,” “Volunteerism,” “Motivation & Attitude,” and “Texting Isn’t Talking.”
“I think the ‘Tolerance & Diversity’ workshop was really important for us,” Geitner said. “My school is very much one culture. We are all white, basically.
“It’s important to learn how to interact with people who are different from you.”
Putnam said growing up in a predominately white community can make interaction outside that community “awkward.”
“It isn’t just about white people and black people,” Putnam said. “When you live in a place like Knoxville, you don’t have any diversity. It’s nice to have a clue on how to interact.”
Tony Franklin, presenter for the “Tolerance & Diversity” workshop, said the goal of the his discussion was to introduce a notion of “cultural competence.”
“We talk about the ability to interpret and learn from other cultures,” said Franklin. “The challenge is to seek out people who are different from you and to learn from them. The other notion is finding commonalities with others. What values do groups have in common? What is that we know about ourselves and how is that relatable to others.”
Other workshops included:
“Are You Smarter Than The Internet,” presented by the Attorney Generals office
“Bullying,” presented by State Police Trooper Jason Wilson, D-7 safety education officer  “Marketing Yourself for Life,” presented by Robby Dunn  “Motivation & Attitude,” presented by Bill Breeden of Aledo  “Streetwise Tips for Boys and Girls,” presented by David Kellogg, coordinator of criminal justice at CSC & Tony Law, security administrator at CSC  “Texting Isn’t Talking,” presented by Luke Raymond, OSF Holy Family  “Tolerance & Diversity,” presented by Tony Franklin, University of Illinois Extension  “Volunteerism,” presented by Karen Mauldin-Curtis, Peace Corps Fellow Program in Community Development, Western Illinois University  “What Your Mother Did Not Tell You About Sex,” presented by Sherry Bliss, Tri-State Family Services After the Teen Leadership Summit, students are asked to return to their respective schools and integrate the information learned into a school event.
“We are trying to equip kids so they can make good decisions. We want to plant a seed that tells kids it’s OK to stand up for what you believe in,” said Paula Johnson, the executive director of Knox County Teen Court. “Hopefully they start to get an awareness of the opportunities around them.”
The summit included a tour of Carl Sandburg College, lunch and a keynote presentation by The Media Guy, Inc. on giving second chances.
Members of the Knox County Teen Leadership Summit 2012 Planning Committee include: Julie Bevenour, Safe Harbor Family Crisis Center; Ashley German Cooper, Family Planning Service of Western Illinois, Inc.; Linda Huddle, Knox County Teen Court; Paula Johnson, Knox County Teen Court; Jennifer Chancay, Knox County Health Department; Stephanie Frambes, Knox County Health Department; and Erin Olson, Knox County Health Department.