Hispanic Heritage, Bicultural Parenting, and Me 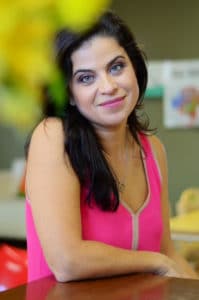 Living in Miami causes me to think daily about what my Hispanic heritage means to me, to my parenting, to my children, and to the work that I do.  I have come to realize that I have had three different experiences being Hispanic in the United States. The first is as a Colombian immigrant.
My parents brought me here as a child, and like many immigrants my dad’s goal was to give a better life to his family.  The second experience is when I left Miami and experienced what it was like to be the minority.  Up until the point I left Miami, I had never felt different.  My current experience is that of a Hispanic parent, one attempting to pass along a Hispanic heritage to my children.
Being raised by Colombian parents was not easy. I came here very young and for all intents and purposes I was the “gringa” in the Colombian house.  Often I was told that I was too sensitive like the “gringos” or too this or too that because my parents experienced me as different from them.  Here was this American teenager walking into a Colombian household.
The truth was that I wasn’t an American and I wasn’t Colombian:  I was somewhere in-between. Today, I realize that I was bi-cultural.  I also understand how hard it was for my parents to look at their child and not recognize me because I had become part of the bigger culture.
The first response of most parents is to attempt to keep their children like them.  However, the children are being exposed to a bigger culture.  They go to an American school with American teachers with American culture surrounding them.  The parenting task at hand is to accept and witness how your children grow up in two cultures.
Be willing to give your child the opportunity to take a look at both cultures and choose what they love best, a little bit of your culture, a little bit of what the United States gives them.  Take moments and attempt to see the world through their eyes and see this new world together.  If you explore your country of origin’s culture and then become detectives together about the culture of the United States, then both of you can grow and change together. 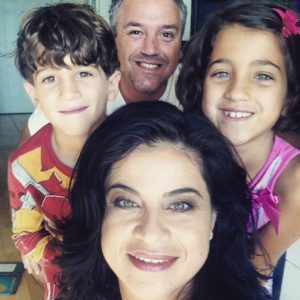 Here I am with my lovely husband and two kids.

This brings me to my next experience of being Hispanic in the United States. I never felt like a minority or like “the other” growing up in Miami.  My experience in Miami was that we were all Latino and even my blonde American friend was Latino somehow.  When I left Miami to go to college in Boston, I learned that I was “brown.”
The idea of being minority, complete with stereotypes was really difficult and interesting.  I was observing white privilege from this objective perspective because up to that point it had not truly affected me personally.  Now my heritage, my culture, even my facial features were being scrutinized as different and less than.  It was interesting to know that for some of those I encountered my physical and cultural difference made them choose to not bother getting to know me.
This continued from college, to my move to California, and into my professional life as a therapist in L.A.   As a therapist I was able to experience what being “the other” meant and how it shaped the teens I helped.  This idea of difference and being judged by external factors caused some teens to reject their parents’ culture because they were being discriminated against. For others, it gave them a myopic look of who they were so they stuck to being small and fitting into the stereotype they were being given.
Parenting prejudice and its effects is another hard obstacle, but we have to think about how we talk to our children about it.  From a very young age children begin to notice difference; as parents we have an opportunity in that moment to teach our children a family value about making choices based on the difference of another.  We have to think about how we will parent our children when another is judging or rejecting our children because they are being seen as different. I challenge you to stay away from blame, simplicity, or avoidance.  In my experience, these three choices do not fix the problem.
The hardest experience thus far of being Hispanic in the United States has been raising my children with a sense of their heritage.  I have spoken to them in Spanish since they were born, but continued to speak to my Cuban American husband in English. My children have chosen English and only discovered the importance of Spanish when we went to visit my family in Bogota.  I expose them to Colombian and Cuban foods and our music like merengue, salsa, and my favorite, Colombian vallenato.  As a result they experience “La Carreta” as the place they get soup or rice and beans and they each love to drink maracuya at the Colombian restaurant.  However, they do not know innately about the heritage or the reasons behind the foods, music, and drinks; they just know that it is what we do as a family.
The most important part of these experiences is the experience my children are having of us as a family.  My husband and I are bicultural.  We have both experienced two cultures, two ways of being and we have both chosen from each to become who we are.  My children get the result of bi-cultural parents exposing them to what they know the world to be.  We eat fried chicken and chicharron with a side of black beans and rice and if mommy is in the mood she makes them jugo de maracuya while we listen to Bruno Mars.  Mommy speaks to Daddy in Spanish and Daddy responds in English.  What is most important is to pass on your own experience, your truth, your authenticity, unapologetically. Then, witness how your children choose and become citizens of this great new world.

Lina Acosta Sandaal, MA, LMFT is a psychotherapist, child development expert and founder of Stop Parenting Alone, a parenting and therapy center in Miami, FL. She is the parenting expert on Telemundo’s national morning show Un Nuevo Dia, a co-chair from the Florida Maternal Mental Health Collaborative and a consultant for MomsRising, a national organization advocating for children and family rights