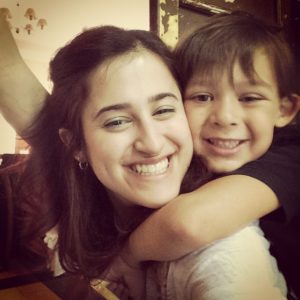 A happy day: reunited with my sobrino, Franco, after months of not seeing each other.

I share an incredible bond with my nephew, Franco (7), and his sister Miranda (3), who both live in Argentina. Technology is a very strong link in that bond.
I moved with my parents to Miami, Florida from Argentina in 2004, when I was seventeen (I was a tween once!). I am the youngest of three girls, and while I moved to an exciting new place, my sisters stayed back home.
Growing up, I would have never imagined being half of the world away from my sisters, my abuela Dorita, or from the loud, family gatherings… but life is rarely what we imagine it to be!
Back then, being an immigrant meant way more than just starting from scratch somewhere else; it was that plus seeing my family once a year or less.
Four years later, my sister became pregnant with my first sobrino. What a thrilling feeling, to be a tia for the first time! I would get anything and everything that she would send me to make me feel as if I was there: party favors from her baby shower, pictures of her ever-growing belly and the most exciting: 4D photos of Franco (which I framed, of course). 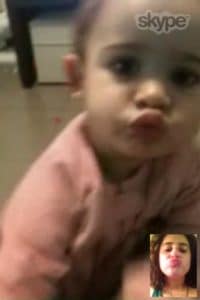 “Tech Besos” with Miranda via Skype.

After 9 months and a lifetime of waiting, Franco arrived and 2 months later, I was able to travel to Buenos Aires to meet him. This would be the start of me as a role of tia. Since then, technology has always been there; from playing games through videocalls, to singing “Feliz Cumpleaños” in voice memos.
Babies and tweens these days understand technology faster than previous generations. Nowadays, it is normal to see toddlers playing with apps on their own cellphones and explaining social media to their abuelos.
I even remember that one time, when Franco was 2 and we were video-conferencing, he leaned forward and he disappeared below the screen. I asked my sister where he’d gone and to my surprise she said:

“He is kissing and hugging the keyboard, he thinks you are the computer.” Talk about technology!

I am happy to report that Franco and Miranda know that I am NOT a computer (or a phone), and that we talk regularly. They tell me everything about school, their new dog Mora, and even show me drawings they make of me!
Chances are, if you are reading this, you know how hard it is to live away  from family – but guess what? We are extremely lucky to be able to share Mañanitas, playdates and mimos with technology. If all else fails, these will help you while you count the days to give your loved ones a real abrazo again.
Keep loving!