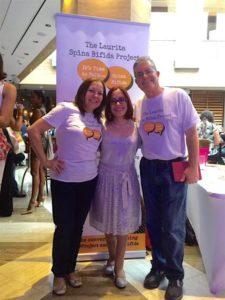 My parents and I in the launch of my non-profit, The Laurita Spina Bifida Project, at Hispanicize, April 2016.

Whenever most people think about childhood dreams, they probably imagine the time they wanted to be an astronaut, a cowboy, a ballerina, a police officer.
Some of these dreams come true— others, we learn to grow out of after reaching a certain age.
But some of these dreams just won’t let you go.
They persist. They nag. They harass. They refuse to become silent.
I’ve had plenty of these dreams— becoming a writer, an actress, a doctor, a figure skater. I think it’s safe to say that most of these are things I will not accomplish.
However, last week, I put all my fears aside for one evening, and one of my wildest dreams came true. I launched my non-profit organization, The Laurita Spina Bifida Project.
I can’t quite pinpoint the moment I made the decision to start a charitable organization. Heck, I can’t even recall the first time I understood the phrase “non-profit” (still not sure I understand!). 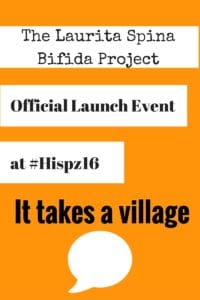 The Laurita Spina Bifida Project launched a new crowdfunding campaign in Indiegogo to raise funds for the initiative.

But I was around age 10 or 11 when I began writing to Oprah Winfrey, begging her to tape an episode of The Oprah Winfrey Show about spina bifida. I was 11 when I received the “thanks, but no thanks” response from her team.
Nevertheless, I continued to write about spina bifida— in letters to public officials and celebrities, in school essays, in national contests. Any chance I would get, I would evangelize the cause.
Fast-forward about 19 years. After six years as a blogger and social influencer, after years of taking the cause to a virtual platform, after so much hard work that has taken an emotional and physical toll, it was going to happen— at no less than Hispanicize 2016!
The timing and venue were so meaningful, especially since Latinos have the highest incidence of spina bifida, out of all the ethnic groups.
On Wednesday, April 6th, The Laurita Spina Bifida Project launched publicly at Toro Toro in the InterContinental Hotel in Downtown Miami!!

Spina bifida is a birth defect that occurs when the spinal column of a fetus does not develop (close) properly. Usually, this occurs during the first month of the gestation period, before a woman even knows she is pregnant. According to the Spina Bifida Association of America (SBAA), spina bifida occurs in7 out of every 10,000 live births in the United States. To learn more visit my blog “Holding Out for a Hero”

What had started out as a modest, simple affair quickly turned into a hot, star-studded evening in the lobby of one of the chicest hotels in the 305. 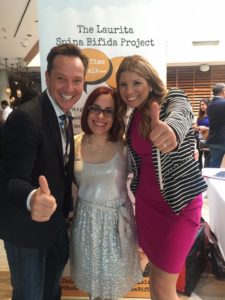 Co-hosted by Latino TV personalities Martín Llorens, Gaby Natale, and Pili Montilla, along with a group of well-respected and admired social media stars as Twitter party co-hosts, the inaugural official event for The Laurita Spina Bifida Project not only showcased some of the Hispanic media and entertainment industry’s most popular faces— it was the very example of the slogan for this year’s Hispanicize Event— Power In Unity.
Even my longtime friend, Jairo a.k.a. D.J. Hotride, who lives in Miami and has spina bifida, showed up and surprised me!
As if that weren’t incredible enough, we had the attendance and support of many other wonderful human beings— Martín Llorens invited Chiqui Delgado (yes, yes!), Marines Duarte, and Camila Canabal.
Soon, I had flashbulbs blinding me with so many journalists and influencers taking photos!! 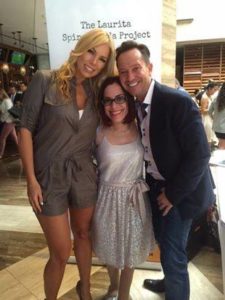 What an amazing moment. I owe it all to the wonderful people who in turn reached out to invite others at the last minute.
Our Twitter party co-hosts were unbelievably amazing! They helped me make quick, on-the-spot decisions and assisted in keeping the conversation flowing smoothly when I had to attend to people in person.
Diana Limongi, Ludo Gabriele, Elianne Ramos, Amanda Dufau, Annie Alvarez, and Fiorella Reategui— I could never thank you enough for your support— online and in person!!
Others donated prizes to give away during the event— George Torres a.k.a. “Urban Jíbaro,” Becky García (“Becky Boricua”), and Melissa Gonzalo of Stella Rosa Wines all contributed gifts for our winners!
Katherine Doble of Schwartz Media Strategies was instrumental in putting together this event. Without her, it would not have happened! 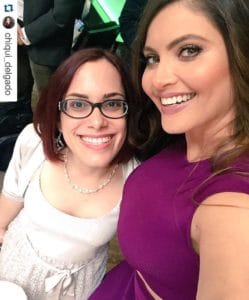 TV Host, Chiqui Delgado, and I.

Last, but certainly not least, I was honored to have Jorge Plasencia, co-founder, Chairman and CEO of República, attend in solidarity!
He not only lent his support in person and even brought his amazing mother to the launch event; he has graciously offered the services of República’s team and expertise to The Laurita Spina Bifida Project.
A pivotal moment for us was indeed being able to announce our big news…Toyota is donating $1,000 to our awareness campaign!!
The LSB Project board and I could never say “gracias” enough. It is a true privilege to partner with the leading car brand for Hispanics in the U.S., but most importantly, we are humbly grateful for their commitment to elevating la comunidad.
As everyone recovers from the biggest Hispanicize Week yet, we cannot afford to rest on our laurels.

“My tribe” who helped me launched the Laurita Spina Bifida Project at Hispanicize, April 2016. Photo by: Blanca Stella Mejía of “Mi Caminar”

Now that we’ve officially launched, we are promoting our crowdfunding campaign on Indiegogo’s Generosity platform.

We hope many in our tribe will continue to support our efforts.
We will also continue to share posts on social media using the hashtags #TheLSBProject, #SpinaBifida, and #EspinaBífida.
Our hope is to initiate a multimedia, multicultural awareness campaign that will transcend global barriers and shed light on issues affecting the estimated 500,000 people living with spina bifida around the world— issues such as clinical depression, lack of a seamless transition to adult-centered health care, and stigmas surrounding disability in many countries.
So, Hispanicize has ended. The glitter may be wearing off, but the hard work begins. Let’s roll up our sleeves, and use our unity for good! After all, it takes a village— and what a beautiful one it is!
-Laurita Tellado
blogger, social media consultant, activist & voice-over talent