Merida and Her & Mum – A Princess Lesson for us All 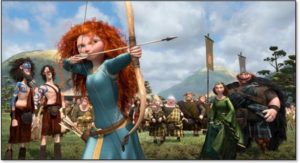 I’ve been excited to see Disney/Pixar’s new movie, Brave (view my previous post).  I was thrilled for Pixar’s first female main character and that she turned out to be a unique princess outside of the more standard Disney princess past.  I went into the theatre expecting a great learning experience for my tween daughter, Maddy. Instead Brave sparked an important mother-daughter conversation.
Initially, Brave’s main character Merida illustrates her fierce need for independence by constantly going horseback riding and following her ‘archery-driven bliss’ at any free time away from her constant studies and ‘princess prep.’ She then fully goes against her mother’s wishes, the Queen, and customs by refusing to marry one of the first-born sons of the other clans during an important ceremony. Merida and her Queen mother have a heated argument.  And just when all seems irreparable the Disney magic ensues!

After the movie, Maddy and I had a long conversation about our expectations of each other.  We talked about respecting each other’s wishes and realizing that our expectations come from a place of love.  It was an important conversation to have especially now before she enters the teen years.
Yes, spectacular animation, thrilling plot and comedic relief will make Brave another Disney/Pixar classic, but more importantly it will create a teachable moment between tweens and their parents.  The fact that an animated movie kept all of our group of tweens glued to the screen and fully engaged was an accomplishment as well. It’s a great summer family outing.  As you’ll see in the video below, the girls feel the same!
Saludos,
Katherine
DISCLOSURE: LosTweens was invited by Disney to preview Brave during its South Florida premiere week but all views are our own.