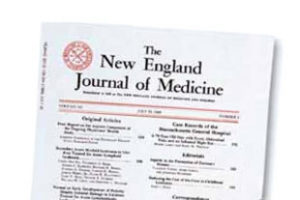 The New England Journal of Medicine

The results of a new study to be published November 6, 2015 in The New England Journal of Medicine to coincide with presentation at The Obesity Society Annual meeting in Los Angeles, California show that three years after undergoing bariatric surgery, adolescents experienced major improvements in their weight, metabolic health, and quality of life.
Teen-LABS (Longitudinal Assessment of Bariatric Surgery), a multi-center clinical study examining the safety and health effects of surgical weight loss procedures, is the largest and most comprehensive analysis of bariatric outcomes to date in adolescents.  The study enrolled 242 adolescents, ages 13 to 19, all of whom were severely obese with an average weight of 325 pounds before surgery.

“The remission rates for medical conditions such as diabetes and hypertension are greater than those we see in many studies of adults who had long-standing obesity before bariatric surgery.  It is possible that earlier intervention could lead to better outcomes,” said Inge. “If sustained, the improvements seen in weight, blood sugar, kidney function, blood pressure, and lipid levels may translate into fewer strokes, heart attacks and other disabilities later in life.”

Nutritional and other risks associated with surgery were also well documented.  The study found that fewer than five percent of study participants had iron deficiency before surgery, but more than half had low iron stores three years after surgery, supporting the recommendation for monitoring of vitamin and iron supplementation in these patients.  In addition, 13 percent of patients required additional abdominal surgery, most commonly gallbladder removal, during the three-year period.

“We are also learning that once teens have crossed into these extremes of obesity, only 25 percent of them can achieve weights in the normal range after surgery, and over half of them remain severely obese even after surgery,” said Dr. Michael Helmrath, a study co-author and adolescent bariatric surgeon at Cincinnati Children’s.  “Timing of surgery may prove important.”