Parenting Resolutions for the New Year 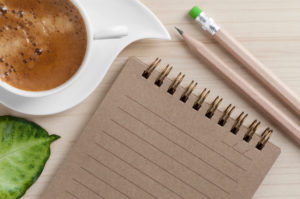 I've always thought of new year's resolutions as being the same as giving up something for Lent.  Pick a vice, stop doing it but 40 days later you're right back at it.  Why bother?
It wasn't until I started my own businesses that I realized a new year's resolution didn't have to be about giving but instead gaining.  Every time I meet with a perspective client for my  marketing company, Siren Marketing,  I discuss their business plan – goals, profile of their best clients, what they've done right and what they regret doing.  It's a great exercise to help company owners to focus on their needs and provide me with information to craft a marketing plan.   At the end of every year, I do the same thing with my own company
So, if it works for the company (which it does), then why not apply the same process to other aspects of my life.   Take…oh, I don't know….parenting for example.  Let's do it together.
Think about last year.  Now, let's write down what worked for you and the kids.  Maybe you implemented a new rule that you wish you had thought of sooner?  Did you go on a vacation you really enjoyed?  Did you create a new routine that helped with the morning rush?  Anything that you can think of that made life and the kids' lives a little happier?  For me, I tailored the discipline and the consequences I dolled out to be age appropriate for each of my children.
Ok, now let's jot down why this parenting success was a success.  Why did it work so well?  After the initial shock and protest, my children behaved better once they realized their punishments were going to bother them much more than just sitting in time out.  My son didn't want to lose his weekend video game privileges and my social-butterfly daughter didn't want to be grounded.
Now we reach the hardest step.  Write down: what you are failing miserably at as a parent?. No parent ever wants to admit that they're not winning the “Mommy/Daddy of the Year Award”.  Or at least they definitely don't on a blog read by over 1,000 readers…but let's move on.  So what are you doing that you shouldn't be?  Are you yelling?  Do you lose your temper too often?  Here's my biggest parenting pitfall: paying attention to my phone instead of paying attention to my kids.  Aside from missing quality time with my children, the kids decide to use these moments to get my attention by any means possible.  This means fighting, arguing and usually someone getting hurt so then I end up losing my temper, yelling and….umm yeah, you get the picture no need to go on here.
POST REWIND: 2012 TWEEN NEW YEAR RESOLUTIONS
We've established what we do wrong, now let's fix it.  When do you most often have these failing moments?  Is there something that triggers it?   Do they always happen during a certain time of day.  Take my problem for example,  I am most likely to ignore my children during bed time.  And who can blame me really?  Bed time is when all of the good Twitter parties are going on and there is no way that I am going to win that big screen television without tweeting 140 characters per minute!  Ok, ok, maybe I should focus on reading books and having quality conversations before tucking in my children.  Which leads me to my next question…
What can you do to prevent you from having those moments of failure?  Think about your parenting success and why it was a success and apply the same method to your problem.  Word of caution here: don't over analyze.  Simple solutions are the best ones.   You'll be more likely to incorporate them  into your routine.  Does your parenting failure happen right after you get home from work?  Take five minutes to yourself instead of jumping into the evening routine.  Even if you have to lock yourself in the bathroom it will be better than blowing up at your kids.
POST REWIND: RESPONDING TO YOUR TWEEN SAYING I HATE YOU
My parenting resolution for 2013 will be to put away my cell phone and iPad between 7:30 to 8:30 p.m. so I can focus on my children.  It's not going to be easy and there are going to be times when I'll be required to work during that time but making the attempt is half the battle.  Need a little boost to make that parenting resolution?  Just think about how happy you are thinking about that parenting success you had in 2012 and know that you can get that great feeling again in 2013.  Let's do this together!
Saludos y Abrazos in 2013!

how to get your ex girlfriend back