By Alisa Valdes for Mamiverse 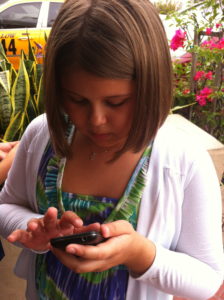 A study by the American Academy of Pediatrics says that three-quarters of all American teens have cell phones. Research by the academy indicates that most of these kids are getting these phones in middle school and, increasingly, even earlier than that.
The widespread use of cell phones by children raises important questions for parents. We’re going to try to answer some of them for you now.
Does My Kid Even Need a Cell Phone?
This is a tricky question, because a lot depends upon the values and lifestyle of your family.
There are very compelling reasons to equip your child with a cell phone, according to the AAP—not the least of which is giving your kid a way to reach you or emergency services if they find themselves in trouble. For children with medical conditions or other special needs, a cell phone can be a literal lifeline.
Beyond that, according to several studies of youth and technology, cell phones have become the new norm in terms of socializing. According to a study by YouthBeat, a market research division of C&R Research, 84% of teens with cell phones use them to stay in touch with friends, primarily via text messaging. (Among younger kids the percentage who use cell phones to socialize is much lower, at 22%.) As a parent you might not like the new normal, but it is what it is—and we all know how important a “normal” social life is to teens.
Read the entire article on Mamiverse.