Signs of a Stressed Tween 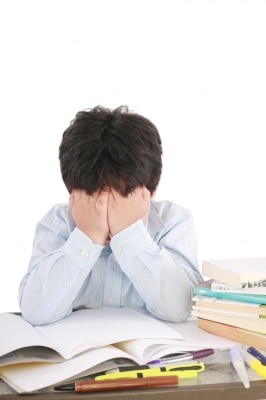 During my tween’s annual visit, the doctor asked my daughter if she was stressed.  It struck me as a great question.  Coming off a week where volleyball and basketball practices overlapped, a presentation to her Girl Scout troop and two big tests, my tween answered ‘yes’.  As they discussed the reasons, I sat astonished that my daughter’s biggest worries had gone from which friend she wanted to play with to how she was going to find time to relax.
The tween years are marked with an increasing school workload, after-school sports and activities, developing friendships and high expectations for success.  Mix all this with new technologies, constant connectivity and the challenges that come along with it and it’s no surprise  tweens are labeling themselves as stressed.  Identifying the signs can be difficult when parents just as busy as their children.
It’s crucial that we, parents, do recognize the signs and step in.  I was lucky to have my child’s pediatrician point it out before a more serious problem developed.  Now I know what to look for and can react accordingly.
A few signs your tween may be stressed:

So what do you do with a stressed tween?  Talk about it and assess the situation.  While sometimes tweens just need a break, a weekend without activities, time for themselves or a pep talk, don’t be afraid to seek professional help if it is more serious.  A talk with my daughter’s pediatrician was all it took to set her back on the right track and arm me with the tools I need to identify a stressed out tween.
Abrazos,