‘To Party or NOT to Party?” – that WAS the pregunta!
Part II- We did it! How it went and what we learned
So much for the ‘gringo’ being the sensible one! My husband- a.k.a. ‘el gringo’ as his all-Latino friends call him for growing up in South Florida’s Hialeah community- enjoyed the super fiesta more than anyone I think. And his family- siiiii– they danced and had a blast too- said it was one of our best parties ever! Our family, friends and the girls’ schoolmates are a terrific example of cultural diversity… making a kids’ party all the more fun.
So our twins are 10- Dios mio– how did that happen? We blinked and our first party, which was a super Park party as well, was gone and we were doing the limbo, hula hoop and dancing to celebrate their 10th… wepa! What was the secret to the successful party? For sure, the party coordinators from Miami's Expressions of Talent. They kept the Tweens completely entertained which is NOT facil– this age can be more brutal than teenagers! And the party was flowing. That expense certainly was worthwhile and made a huge difference.
Other ‘success’ secrets included:
–       FUN INVITES! I’m a HUGE Costco shopper (this is an unsolicited truth!) I created & ordered my invites online, with a cute photo and they were $15 for 50 with envelopes! That helped set the tone and welcomed everyone.
–       Mucha comida! There was plenty of food but also a variety of food. From Cuban pastelitos to sandwiches and veggie tray with cheeses (yup, from Costco) to Aba’s ‘famous’ meatballs and of course some pizza for the kids. My chocolate-covered strawberries were gone in minutes! The variety allowed something for everyone.
–       A HUGE CAKE – Abuela went overboard with the cake! Yet, it became a centerpiece that everyone loved and the kids really had fun when we sang the Happy Birthday! The design didn’t turn out exactly how I requested, but I chose not to focus on that and just enjoyed the day.

–       INVITING ENOUGH KIDS. Sometimes it’s easier- and more affordable- to have less kids because that typically translates to less parents and siblings! The party was so much fun because the girls were surrounded by so many  primos & amigos.  As my husband says, ‘if you’re going to do it, just do it!’ 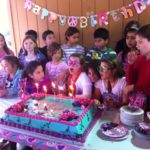 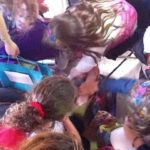 Pinata & gift craziness with their amigos – luvveed it! 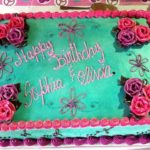 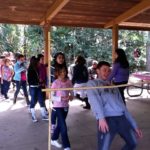 Kids of ALL ages get into the fun!

–       LISTS, LISTS & MORE LISTS.  I made an invite list, a food list, a kid list, a goodie bag list and a dance/music list. This kept the planning organized while I’m working, blogging and running the rest of our daily lives.
–       DETERMINATION TO LOVE EVERY MINUTE. If I have learned anything after so many parties, functions and events in my personal and professional life- it was this lesson. There always will be something you forgot or someone that was upset (both were true this time again!). It’s the decision to accept this and focus on sincerely enjoying the moment that makes the whole process, including the expense, worthwhile. Toss the stress out the window and focus on loving it. Tweens are in a constant state of change- everyday that passes they get closer to the teen years and further away from allowing us to baby them in some way. Feel good about knowing you did your best and you, and THEY, loved what you planned together.
Saludos- Cristy & ‘El Gringo’ Chris