Our amigas over at Mamiverse have a great list of book recommendations for the entire family including an ENTIRE section for tweens and bilingual books!  Here are just a few of our favorite Mamiverse book reviews for tweens: 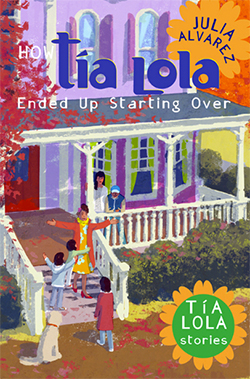 In the final entry in the Tía Lola series, families are reconfigured, a mystery is solved, and Tía Lola becomes the proprietor of a bed and breakfast located in the home of the aging, but still mentally acute, Colonel Charlebois. Miguel and Juanita have moved from New York City to rural Vermont with their mother, leaving their Papi in the city—and acquiring Tía Lola as their nanny.  Read the entire review on Mamiverse. 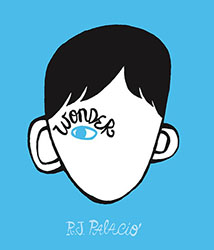 Wonder
By R.J. Palacio
Knopf • 2012 • 320 pages
Hardcover ($15.99)
ISBN: 978-0-375-86902-0
Ages 10 and up
August Pullman, better known as Auggie, is about to start 5th grade in a new school. Up until now, he had been homeschooled by his loving and over protective mother. Auggie is a completely normal boy—he is obsessed with Star Wars, plays Xbox every chance he gets, and loves his dog, Daisy. But most people don’t see how normal he really is. Instead, they tend to focus on the extreme facial deformities with which he was born. Despite doctors’ best efforts and the over twenty surgeries Auggie has endured to try to correct his physical appearance, he will never look as normal on the outside as he feels on the inside. Read the entire review on Mamiverse. 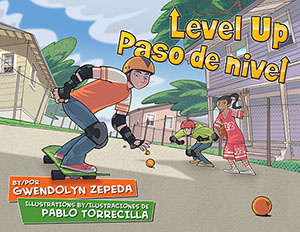 Level Up/Paso de nivel
By Gwendolyn Zepeda • Illustrated by Pablo Torrecilla
Translated by Gabriela Baeza Ventura
Piñata Books • 2012 • 32 pages
ISBN: 978-1-55885-747-6
Hardcover ($16.95)
Ages 5-8
Do you know a young couch potato? How about a junk food addict? Is there a video game or computer aficionado in your life?  If so, this book is a must read! Through split page English and Spanish text and bright illustrations, it tells the story of a boy who lives an isolated life, fixated on video games. He rejects every invitation to play basketball or go skateboarding. Nothing or nobody can coax him out of his room, where alone, he wolfs down chips, cookies, and sodas.  Read the entire review on Mamiverse.

A Mummy in Her Backpack/Una momia en su mochila
By James Luna
Piñata Books • 2012 • 112 pages
ISBN: 978-1-55885-756-8
Trade Paperback ($9.95)
Ages 8-12
Fourth-grader Flor returns home from a family trip to Mexico, only to find a century-old mummy in her backpack. “Rafa,” born in the 19th century and now on permanent display at the mummy museum in Guanajuato, slipped into Flor’s backpack when he heard her family members talking at the museum and learned that they were from the United States, a place he had always wanted to visit. As Flor and her friend Lupita struggle to keep Rafa’s existence a secret, his presence becomes an even bigger complication once he learns that the Day of the Dead is little more than a week away—he simply can’t bear the thought of missing his favorite day of the year, when his descendants visit the museum to remember him and other ancestors. But how can two fourth-graders return a mummy, even a small one, to such a far-away locale?  Read the entire review on Mamiverse. 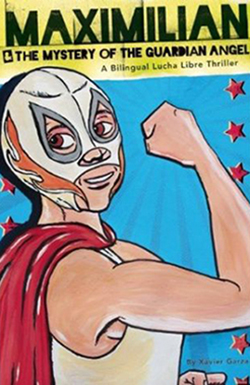 Maximilian & the Mystery of the Guardian Angel: A Bilingual Lucha Libre Thriller
Written and Illustrated by Xavier Garza
Cinco Puntos • 2011 • 207 pages
Paperback ($12.95)
ISBN: 978-1-933693-98-9
Ages 8-12
Eleven-year-old Max lives in Rio Grande City, on the Texas-Mexico border, and inhales lucha libre, the Mexican form of professional wrestling. His greatest hero is the Guardian Angel, el Ángel de la Guarda, one of the longest-lived technicos, the good guys who are always at war with the rudos, the bad guys like Vampire Velasquez, Dog-Man Aguayo and even the female Masked Damsel.
No matter how much Max’s mother scorns wrestlers—and the B-grade movies they star in—Max, his father, younger brother and Uncle Lalo, all love everything about that world: the masks and hidden identities, the good vs. evil nature of the bouts, and the wrestlers’ skills. You can imagine Max’s surprise and his father’s astonishment when a chance encounter at a wrestling match leads them to discover that the famed Guardian Angel is Max’s mother’s long-lost uncle Rodolfo, thought to have died decades before.  Read more on Mamiverse.