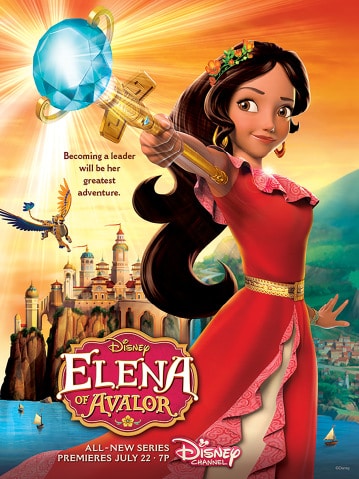 ELENA OF AVALOR – “Elena of Avalor” is an animated series that follows the story of Elena, a brave and adventurous teenager who saves her kingdom from an evil sorceress and must now learn to rule as crown princess until she is old enough to be queen. The series premieres this summer on Disney Channel. (Disney Channel)

Disney’s new Latina princess, 16-year old Elena of Avalor, is the newest character aimed at young girls. With the cartoons in English and the main character’s brown color and Dominican voiceover, Elena joins other Disney princesse, like Snow White, Little Mermaid and Cinderella, to rule little girls hearts.
Elena of Avalor is Disney Channel’s new TV series, which premiered last week, and it includes Latino culture sprinkled in its narrative – like the catchy merengue opening song in its premier episode as well as common Latino names, like Mateo, Luna and Fransisco.
Elena of Avalor is Disney’s answer to a lot of criticism for its lack of diversity in its productions and characters (with Tiana from The Princess and the Frog being the only dark princess – until Elena).
Aside from the diversity angle, Vogue wrote a piece applauding the main character’s “positive and feminist portrayal,” as well as displaying a “healthy confidence in her ability to rule over the kingdom.”
To our surprise, we found the entire Elena of Avalor season 1 full episode in YouTube and here you have it…no need to wait for your tween girl (or you!) to watch on TV. You’re welcome 🙂