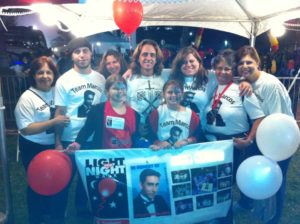 His vision of diversity and love of young kids would have been all about the Tweens!

When I was a just a mere Tween 7-year old- the first new baby in the family was born- Marcos- and a brother basically entered my life although he technically was my cousin. We had an instant bond since he could talk and walk. Always attached, always playing together. He had such a free spirit, a true entrepreneur owning a Music DJ business at 13 and a huge heart. But at 20, Leukemia claimed him and our family has had a sense of loss ever since.

If there ever was a person who would tell you- “just go for it!” – it was Marcos. He has become our guardian angle. I absolutely know he vigilantly watches over our family. So with this new venture of LosTweens.com and MyLosTweens.com- one I’m sure he would LOVE- we dedicate it to his immense spirit and life. Although he had a short time on earth- he had such an amazing impact. As a testament to that impact a new Teen patient “playroom” was dedicated to him at the Oncology department of Joe DiMaggio’s Hospital in Hollywood, FL. He motivated a young friend, Evan, to seek the treatment he needed, and Evan survived the disease.

Marcos- we love you!