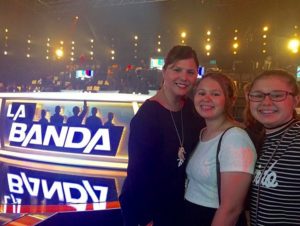 My twin teen girls and I were able to attend the Miami Beach auditions and a live taping at the Univision studios in Miami.

Our Los Tweens & Teens team has had fun since July watching and attending auditions and live tapings of Univision’s first season of La Banda – a talent-search reality show cross between American Idol and The Voice airing nationally each week in Spanish on the network.
The boys competed from among XX contestants to be part of the next super boy band CINCO who will perform for the first time in Miami on January 30th at the Fillmore Theater in Miami Beach.
It was exciting to see Ricky Martin participate as a judge and producer giving the boys such personal advice based on his own experience as a member of Puerto Rico’s famous Menudo boy band in the late 80s.
My favorite part of the process was how easy it was to get my teen girls to watch Spanish-language television! 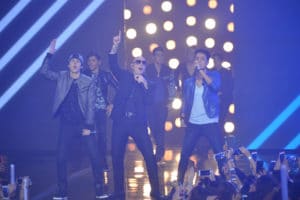 “La Banda” contestants had the opportunity to perform with Latin superstar, Pitbull, in the semi-finals.

Each week we watched the show together and watched the interaction of the boys and their very supportive families.
Even better was seeing their non-Latino friends so enthusiastic to follow the boys and their stories. It goes to show that music always crosses cultural lines and helps bring so many unique people together.
The family atmosphere and specifically moms played a central role in the show as each contestant’s family was interviewed and highlighted as part of their journey. I had the opportunity to interview three of the contestants and they immediately talked about their moms – videos coming soon!
We’re excited to attend the Miami concert and follow the careers of the first CNCO members: Joel, Erick, Zabdiel, Richard & Christopher – stay tuned for more!
Watch CNCO’s debut single “Devuélveme Mi Corazón”: